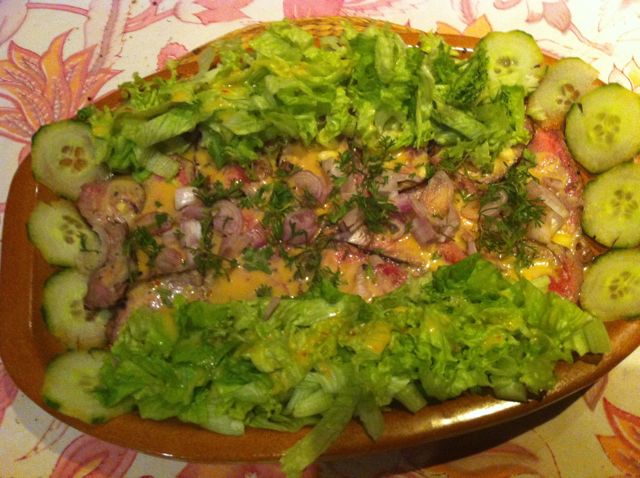 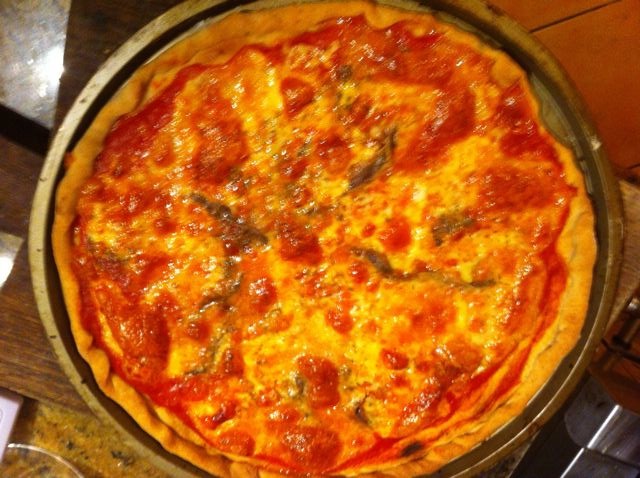 We've been eating Beef Salad again and delicious home made pizza with anchovies.

On a completely different subject, I was sent this gem today:

It all makes sense now. Gay marriage and marijuana being legalized on the same day.

Leviticus 20:13 - "if a man lays with another man he should be stoned." We've just been interpreting it wrong all these years.


Sad news today about Robin Gibb
I always wondered about his teeth, especially in the early days.
I thought their early hit "Massive Chew Sets" was a tribute to his dentist.

How to make a cat levitate


I'm sure this one has been around for a long time but I only heard it for the first time this week on the radio.
- Tie a piece of buttered toast onto a cat's back, buttered side upwards
- Throw the cat out of the window


A Friend Is Like A Good Bra...
Hard to Find , Supportive
Comfortable, Always Lifts You Up
Never Lets You Down or Leaves You Hanging
And Is Always Close To Your Heart!

The International Festival of One-Liner jokes


I got this one is the mail this morning:
One guy says to the other: I am dating 2 anorexics, 2 birds 1 stone!!
I didn't get it at first, having not lived in the UK for about 30 years, I had forgotten that a stone is an obscure British measure of weight. It didn't help that I thought anorexics were people who had lost their memory.
Sometimes we can all be really thick.


Some polemic about the origins of this one.
Some say it was originally shown on BBC TV, back in the seventies - apparently, Ronnie Barker could say all this without a snigger. If this is true, it is hard to believe that the BBC received not one complaint and several Ronnie Barker fans have e-mailed me saying he never would have performed this.
The true origins are documented at matthewgoldman.com where you can find several versions including transcripts and MP3s. It seems that the original version comes from a Colonel Stoopnagel, his version can be found here: fun-with-words.com

Try getting through it without converting the spoonerisms as you read;

The sugly isters had tickets to go to the ball, but the cotton runts would not let Rindercella go.

Suddenly there was a bucking fang, and her gairy fodmother appeared.
Her name was Shairy Hithole and she was a light rucking fesbian.
She turned a pumpkin and six mite wice into a hucking cuge farriage with six dandy ronkeys who had buge hollocks and dig bicks

"Mist all chucking frighty!!!" said Rindercella, and she ran out tripping barse over ollocks, so dropping her slass glipper.

Suddenly, Betty Swallocks lifted her leg and let off a fig bart.
"Who's fust jarted??" asked the prandsome hince.

"Blame that fugly ucker over there!!" said Mary Hinge.

When the stinking brown cloud had lifted, he tried the slass glipper on both the sugly isters without success and their feet stucking funk.
Betty Swallocks was ducking fisgusted and gave the prandsome hince a knack in the kickers.

This was not difficult as he had bucking fuge halls and a hig bard on.

New addition to the family 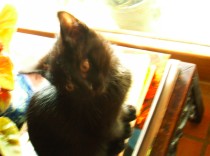 There is a new addition to the family. This little pest (right) has been creating havoc in my kitchen but, fortunately, she seems to be calming down and she is starting to uderstand about no-go areas.

Summer came and has now gone away again, we are underwater practically.

Exciting election day in France. Contribution (left) from one of my fans. Its entitled "Coming soon to every town hall in France". What was that German movie "Even dwarves started small..."? Herzog, or Fassbinder maybe?

Off on my travels again at the crack of dawn.